Who Are The Yoruba People?

The Yoruba people (Yoruba: Àwọ̀n ọ́mọ́ Yorùbá) are an ethnic group of southwestern Nigeria and southern Benin in West Africa. The Yoruba constitute over 35 million people in total, the majority of this population is from Nigeria and make up 21% of its population, according to the CIA World Factbook,making them one of the largest ethnic groups in Africa. The majority of the Yoruba speak the Yoruba language which is a tonal Niger-Congo language.

The Yoruba share borders with the Borgu in Benin; the Nupe and Ebira in central Nigeria; and the Edo, the Ẹsan, and the Afemai in mid-western Nigeria. The Igala and other related groups are found in the northeast, and the Egun, Fon, and others in the southeast Benin. The Itsekiri who live in the north-west Niger delta are related to the Yoruba but maintain a distinct cultural identity. Significant Yoruba population in West Africa can be found in Togo, Sierra Leone (where they have blended in with the Saro and Sierra Leone Creole people), and Ghana. 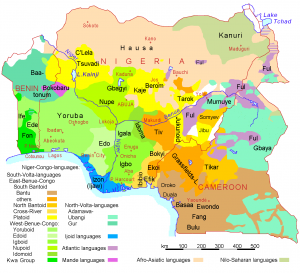 As an ethnic description, the word ‘Yoruba’ was first recorded in reference to the Oyo Empire in a treatise written by the 16th-century Songhai scholar Ahmed Baba. It was popularized by Hausa usage and ethnography written in Arabic and Ajami during the 19th century, in origin referring to the Oyo exclusively.

The extension of the term to all speakers of dialects related to the language of the Oyo (in modern terminology North-West Yoruba) dates to the second half of the 19th century. It is due to the influence of Samuel Ajayi Crowther, the first Anglican bishop in Nigeria. Crowther was himself a Yoruba and compiled the first Yoruba dictionary as well as introducing a standard for Yoruba orthography.

The alternative name Akú, apparently an exonym derived from the first words of Yoruba greetings (such as Ẹ kú àárọ? “good morning”, Ẹ kú alẹ? “good evening”) has survived in certain parts of their diaspora as a self-descriptive. 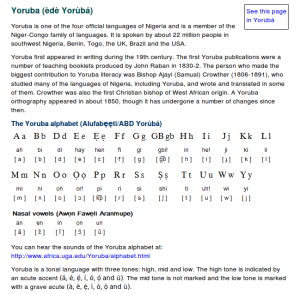 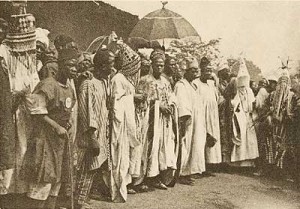 The Yoruba culture was originally an oral tradition, and the majority of Yoruba people are native speakers of the Yoruba language. The number of speakers is roughly estimated at about 30 million in 2010.

Yoruba is classified within the Edekiri languages, which together with the isolate Igala form the Yoruboid group of languages within the Volta-Niger branch of the Niger-Congo family. Igala and Yoruba have important historical and cultural relationships. The languages of the two ethnic groups bear such a close resemblance that researchers such as Forde (1951) and Westermann and Bryan (1952) regarded Igala as a dialect of Yoruba.

The Yoruboid languages are assumed to have developed out of undifferentiated Volta-Niger group by the 1st millennium BC. There are three major dialect areas: Northwest, Central, and Southeast. As the North-West Yoruba dialects show more linguistic innovation, combined with the fact that Southeast and Central Yoruba areas generally have older settlements, suggests a later date of immigration for Northwest Yoruba.

The area where North-West Yoruba (NWY) is spoken corresponds to the historical Oyo Empire. South-East Yoruba (SEY) was probably associated with the expansion of the Benin Empire after c. 1450.Central Yoruba forms a transitional area in that the lexicon has much in common with NWY, whereas it shares many ethnographical features with SEY.

Literary Yoruba, the standard variety learnt at school and that spoken by newsreaders on the radio, has its origin in the Crowther’s Yoruba grammar compiled in the 1850s. Though for a large part based on the Oyo and Ibadan dialects, it incorporates several features from other dialects. 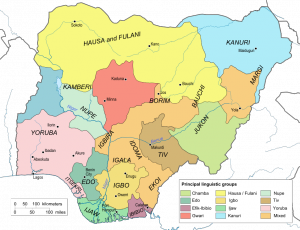 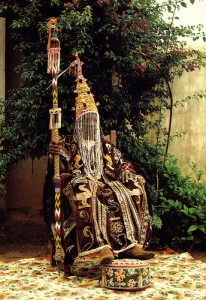 A Yoruba king with a beaded crown. These were traditionally word to prevent people from seeing the naked face of a king (Oba) who was considered a divine. It was therefore both dangerous and sacrilegious for a mortal to look upon the face of a king. 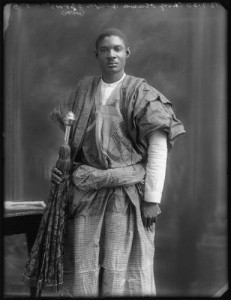 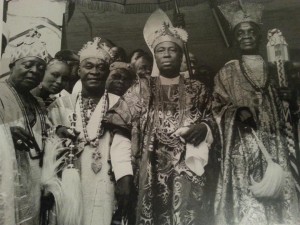 The contemporary Yoruba Kings: Oba Adeniji Adele of Lagos with the Olubadan of Ibadan Oba Asanike, Alake of Abeokuta, and Oba Ademola. Circa 1950 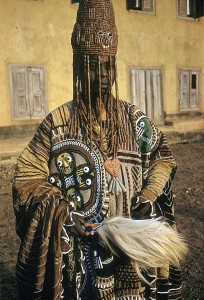 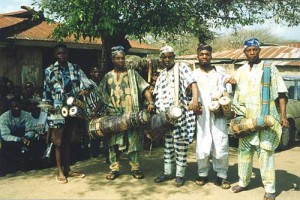 Yoruba drummers. Drums are the foundation of Yoruba music and there are many types of drum for specific occasions or associated with Orisha. 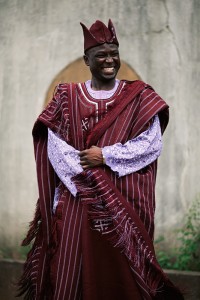 Woman in Buba and Iro 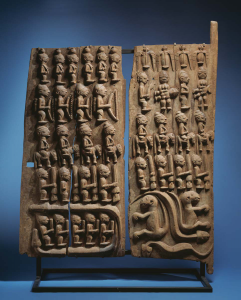 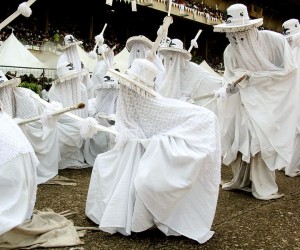 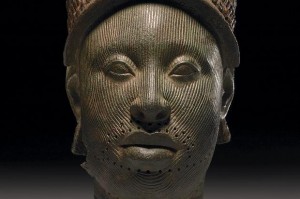 Ife (Yoruba: Ifè, also Ilé-Ifẹ̀) is an ancient city in south-western Nigeria. Evidence of habitation at the site has been discovered to date back to as early as 600 BCE. It is located in the present day Osun State. The meaning of the word “ife” in Yoruba is “expansion” and “Ile-Ife”  is a reference to the myth of origin “The Land of Expansion”. Due to the Ife’s origin it is commonly regarded as the cradle of not just the Yoruba culture, but all of humanity. The Oòni (or king) of Ife  is counted first among the Yoruba kings as well as the chief priest and custodian of the holy city of the Yoruba. 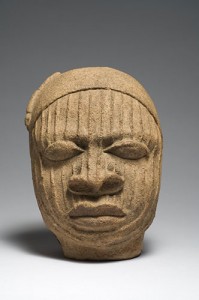 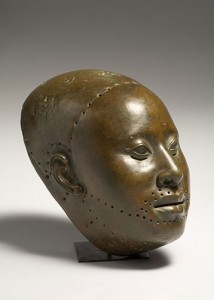 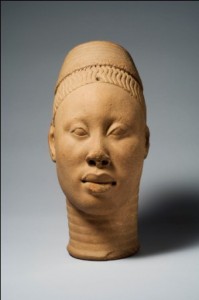 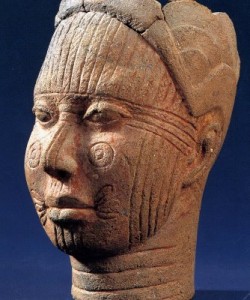 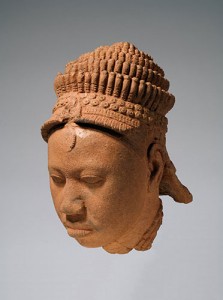 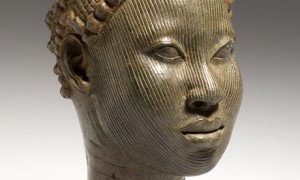 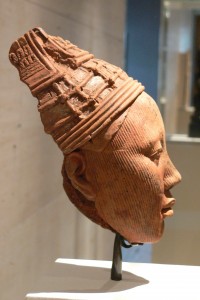 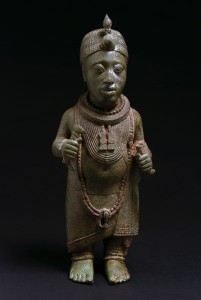 Figure of an Ife king

The Benin Empire (1440–1897) was a pre-colonial Edo state in what is now modern Nigeria. It should not be confused with the modern day country called Benin and formerly called Dahomey. Benin though not central to the stories of The Wild Kingdoms does feature because the Oba (King) of Benin is considered within Yoruba history as a descendent of the first Yoruba king.   The artistic style of Benin also served as a visual reference.

The Oba of Benin 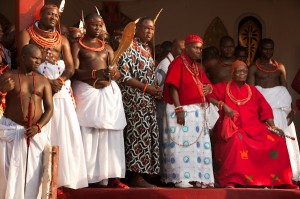 The Oba (King) of the Benin Royal Kingdom in Nigeria is seated beside his Chief Priest, (to his left) and his royal attendants, at the annual Igue Ceremony celebrating the power of the ancient kingdom and reaffirming its well-being and prosperity.

Most ‘Benin bronzes’ are actually made of brass. At one time brass was rare and expensive. It was a material favoured by the king  (Oba) of Benin  and he adorned his palace with it. Because it never corrodes or rusts brass represents the permanence and continuity of kingship. The brass from Benin on display in most museums has dulled over time. Originally the Benin bronzes would have been a shiny reddish colour. These qualities are considered both threatening and beautiful and are symbolic of the Oba. 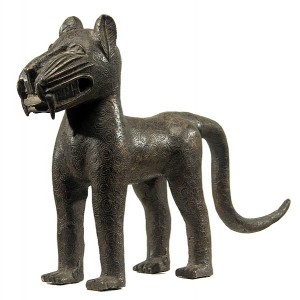 The leopard was a symbol of royal power in the kingdom of Benin. At one time leopards were sacrificed to ensure the well-being of the kingdom. In the seventeenth century the Oba kept tame leopards that he led about in chains when he paraded through the city. This showed his power and domination over the ‘King of the Bush’. 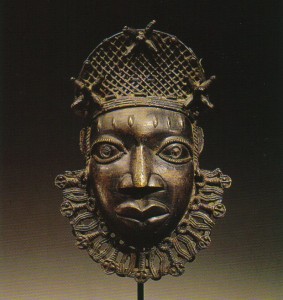 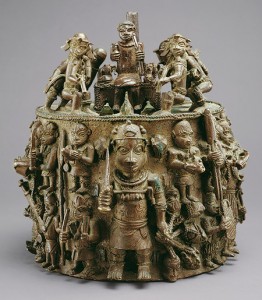 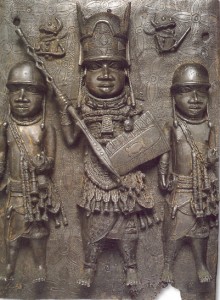 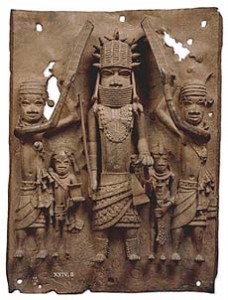 Cast brass plaque of three men. The figure in the
middle is carrying a leather or bark box called an
ekpokin used for ceremonial presentations. The
warriors on either side of him are wearing collars
of leopards’ teeth around their necks. Leopards’
teeth were believed to give the warriors spiritual
protection in battle 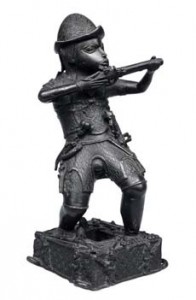 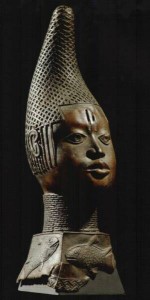 Benin bronze sculpture most likely of a Queen mother.